Interview: Natasha Henstridge Will Save Us All! 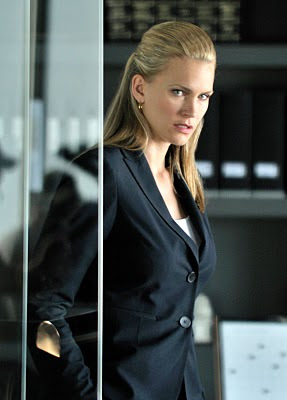 It's up to Natasha Henstridge to save our country's capital — well, for a movie, anyway. Natasha stars as Special Agent Margaret Lucas, an FBI agent tasked with finding a deranged serial killer who’s left dozens dead and only a ransom note demanding $20 million or more people will die. The movie is called The Devil’s Teardrop, and it based on the book by best-selling author Jeffery Deaver (whose book The Bone Collector made it to the big screen starring Denzel Washington and Angelina Jolie). The Devil's Teardrop airs on the Lifetime Movie Network on Sunday, Aug. 8 at 8 p.m. ET/5 p.m. PT.

I caught up with Natasha recently to discuss the movie, as well as her upcoming appearance on Drop Dead Diva and her breakout role in 1995's Species.

Celebrity Extra: I watched the movie over the weekend, and what I liked best was that your character, Special Agent Margaret Lucas is tough, but she’s a real person underneath. She’s not a two-dimension hard-ass type character; you can really see her levels. Was that one of the things that drew you to this project and this character?

Natasha Henstridge: That was definitely one of the appealing things about playing that character. I mean, I read it and she was compassionate and human, and also strong and ballsy. I’m really glad that came across. So, was the movie okay? Was it fun to watch? Entertaining?

CE: Oh yes, it was everything. Although I thought they should have released it around Fourth of July weekend, what with all the action in the movie taking place around then.

NH: I know. Initially in the book, in Jeffery Deaver’s book it was actually New Year’s Eve. And they switched it to the Fourth of July, and I can’t quite remember why that was, but they did make that switch.

CE: Speaking of Jeffery Deaver, had you read any of his books prior to this?

NH: I’d never read any of his books to be honest with you. It’s terrible to say, but I’ve never even seen The Bone Collector. I’ve heard good things about it. And people that I mention the book to or talk to about it just really, really respond to him as a writer. And I thought, we’ll that’s a good sign. You know, people who have nothing to gain at all by saying they really liked his work were impressed with him. In fact I was working with my acting coach on it and she said, “Wait a second, I know this book! I know this story!” And it was really helpful, because she really liked the book and knew the story. He’s got a lot of fans, Jeffery Deaver. He’s definitely got a huge fan base, which is great.

CE: When you got this part, did you read the book the story was based on, or did you want to go into it without preconceptions?

NH: Often times I think that is a better option because you’re not necessarily, when you have the information at hand in the script you’re going to be performing, you’re sort of better off using what’s on that page as opposed to when they adapt it from a screenplay to a book. They are making changes, so if you get too attached to the book ... We could say that, or we could say it was just laziness and getting hired at the last minute as well. Whatever you want to with is fine… (laughter).

CE: How did you train for this? Did you get weapons’ training, work with real FBI agents?

NH: I’ve done stuff before so I had some concept, but those things change all the time, you know. The rules and the way to clear rooms and the way they communicate to each other. There were people there to give us advice on guns, a couple of cops nearby that we spoke to. Also, Tom Everett Scott is on a show called Southland and he plays a police officer in that, so he had some good advice to give.

CE: You all looked good holding your guns — while I was watching, I wasn’t think, “Oh, how cute – look at those actors holding guns!”

NH: That is such a nice compliment, because there were cops actually on the set that were hired to keep the location secure. And then there were some that were gun trainee’s and they said, “Gosh, you really are comfortable with a gun, and you really know what you’re doing.” So, it was really a compliment. Because often times, you’re a girl and people are looking for you to fail or not to look as natural coming from you. And I feel like it’s such a great compliment when people believe it and buy it. 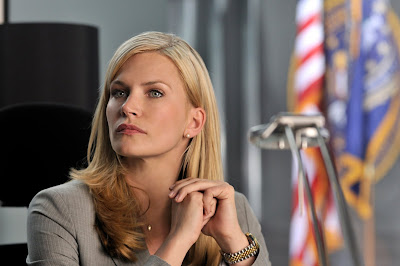 CE: A really compelling aspect of this scenario is how possible this is — stuff like this could really happen!

NH: When you have a story like this it’s always gripping when there’s a time element to the story, and you’re trying to solve a case to save other people’s lives and to prevent any further attacks. So, I thought that was really gripping, but more than anything, whenever you have stories like that, what makes it most interesting is the human being behind the cop. She had an amazing story because she’s lost her son and her husband, and she put everything into her work and sort of had a one-track mind. And through the show she comes full circle back to life, to real life.

And for Tom’s character, it was sort of the opposite. I mean, he went from being nothing but a professional and focusing entirely on his career to pulling out of the FBI altogether and focusing completely on his children. And I thought it was a neat thing to see. It’s an unusual character to be written for a male, I thought that was nice to show that other side as well. The contrast of those two characters and where they were coming from and where they were going, I thought that was really interesting.

CE: And you mentioned that just now of her husband and her son dying in the plane crash, I was heartbroken when she revealed that. What was your reaction when you read that part and had to play that scene?

NH: It’s amazing. When you read things like that, if you have any sort of feelings at all, you’re going to have a reaction and compassion. It definitely makes you feel something. And the other side of that is what you draw and what techniques you use as an actor. It can be painful to do scenes like that, which is always a challenge because it’s where you put yourself. What are you falling back on, what are you depending on? It’s sad. And to play it sad takes energy, and then you want to do justice, you don’t just want to slip over it like nothing. Because you want to do justice for anyone who’s ever been through anything remotely like that. So, it’s a lot of pressure in that way as well.

CE: And even though this is a serial killer thriller, there is also a great message of love and family. Was that an appealing aspect for you?

NH: It was. Like I said, it’s showing that human side to every situation. You’ve got this great story that you’re trying to figure out and unravel as the movie goes on. And then of course, the very human aspect of what was happening as well was appealing.

CE: How was the cast to work with, especially Tom Everett Scott?

NH: Tom was amazing. Real kidder, real lovely guy. Doesn’t’ take himself too seriously and really good at what he does. I thought he was perfectly cast to play this role, of a man who cares more about protecting his children and making sure they’re completely secure in their lives — even over his own job. And I think that’s a rare thing to find in a script for men. He was a really great choice for that. He was lovely. Lovely to work with, really sweet, really funny. Great guy! 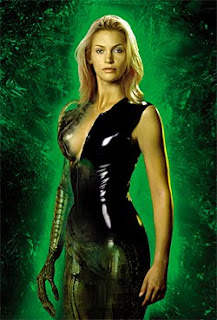 CE: Now I know you have done a lot of work in Hollywood, but you are definitely best known to a lot of fans for your breakout role in Species. How does it feel to know you’ve created such an iconic memory for a generation of fans?

NH: It’s such a compliment. I do feel this sense that I’m disappointing people when they now meet me and it’s been 15 years and they go, “Oh, you’re that girl from Species — you don’t really look like that anymore… (laughter)” No. It’s cool. I guess, it really made an impact, because no matter where I go in the world, people remember that film. It’s amazing. It’s amazing that only through time do you realize the impact that a film had on someone. That it was this classic moment and really impacted people and such. It’s amazing that as time goes on and the more and more people you meet, that they still remember certain moments or certain scenes from a film. It’s great.

CE: Now you have an upcoming appearance on Drop Dead Diva (Aug. 29)— can you tell me about your role?

NH: Well I go in, in what seems to be “Natasha” fashion, and get to stir up some trouble over there. I play Claire Harrison, who is the partner of the law firm with J Parker. J Parker and Claire have some history, and I get to cause some trouble, both businesswise and personally.
Posted by Cindy Elavsky at 12:30 PM