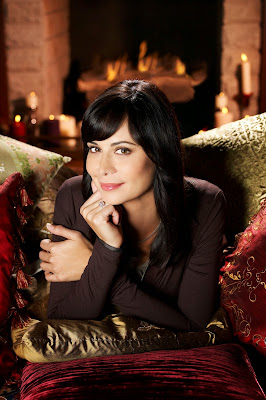 After finishing up seven seasons of one of Lifetime Television’s highest rated, most critically acclaimed nighttime dramas, “Army Wives,” Catherine Bell isn’t resting on her laurels. She’s back in the salt mines, reprising her role of Cassie Nightingale in the sixth installment of the Hallmark Channel’s “The Good Witch” series. In “The Good Witch’s Destiny,” which premieres Saturday, Oct. 26, at 9/8c, Cassie just wants to celebrate her upcoming birthday with family and friends, but a curse involving the Grey Lady (one of Cassie’s ancestors) threatens to ruin the day — and possibly more. I spoke with Catherine recently about the movie, and she gave me all the witchy scoop.

Celebrity Extra: When you first were approached to do the “The Good Witch” series, what was your initial reaction, and what tilted the scales in favor of taking the role?

Catherine Bell: It’s funny — I have been playing characters who are really different from “The Good Witch.” And when I saw the script, I thought, “Well, this character is more like me than any other character I’ve ever played.” So, that was appealing. And I thought it was funny that I was just offered the role; I didn’t have to audition for it, but I’d never played a role like it. Orly Adelson, one of the producers, had heard from a casting director that my personality is actually like this character. I thought it was sort of a risk to take. I mean, I’ve played kind of the tough girl on “J.A.G.” and an army wife, and so this is very different, but I love it.

CE: You say that you are a lot like Cassie; what are some similarities between you two, and what do you like about her?

CB: She’s just got a great sense of humor and a great enthusiasm, and just enjoys people and makes people happy. Those are all things I can certainly relate to. I find people interesting, and try to find the best in them or bring out the best.

CE: Cassie is very likable and seems like a really fun character to play.

CB: She’s very whimsical. Very rarely does anything get her down. Maybe for a moment, but then she finds a way to turn it around. She has such a great, positive spirit. That inspires me in real life to have fun. It’s like, OK, I’m feeling a little down. Maybe I could be a little bit more like Cassie. It’s a really fun role to step into. Every time I come back (to shoot another installment in the series), I put on the clothes and the dark nail polish, and I step right back into Cassie, and start making or turning anything into something good or fun.

CE: What I like about the series is that while each movie is a continuation of the previous movie, the individual movies also stand on their own, so anyone can enjoy them. Can you tell me about this latest offering, “The Good Witch’s Destiny”?

CB: Cassie’s birthday is coming up, and she wants all of her family and friends to get together, but some problems are brewing. Gwen, the grandfather’s wife, her son comes into town, and he’s trouble. There’s someone that is always trouble in this movie, you know, and he’s kind of creating some problems for them. Then Cassie’s stepdaughter, Lori, finds out about the Grey Lady. She’s a woman who looks a lot like Cassie — she’s actually one of her ancestors who brought her to this small town. She lived a hundred years ago, and she died in a mysterious way. There are all these parallels in her life and in my character’s life, and all of these weird things are happening that are kind of lining up a little too much like the Grey Lady.

And like you said, each movie kind of stands alone. So, in this one there’s a problem that’s brewing that might ruin her birthday celebration, and she’s got to figure out a way to bring everyone together. She’s got to make some magic happen.

CE: What message or feeling do you hope viewers take away from watching this movie?

CB: Entertainment can either be shocking, or it can make you think, or it can sort of make you question your purpose in life, or it can just either make you laugh or cry. This is one that makes you feel good. It makes you feel good about people and about family and relationships and life. That should be the purpose for me doing these, and for people watching — I hope that’s what they get out of them.

CE: It must make you feel good to be the purveyor of this feel-good karma!

CB: It’s crazy — of all the things I’ve done, I would say that I get equal, if not more, recognition for this role. If I’m at an airport or out somewhere, someone will walk up and say, “Oh my God, it’s a good witch!” I was on “Army Wives” and “J.A.G.” for a long time, so I find that really sweet and really endearing when I get some Cassie love. People love this show, and that makes me feel good. I don’t think there are a lot of shows on television you can watch that aren’t shocking, that aren’t dark or horrible, that you can watch with your kids, that they can get some sort of lesson out of it or have a good time. Me being a mom, that is important to me as well.

CB: I am. I was in Toronto for the weekend, and I’m driving back to Hamilton, which is where we film. I’m back on set tomorrow for the last four days of shooting.

CE: Have you filmed the whole series up there in Hamilton?

CB: Yes, we’ve done all of them up here in this area just outside Toronto called Hamilton. There’s a cute little town called Dundas. It’s like a 100-year-old little town that has a cute main street where the shops are. Cassie’s original house was like a Victorian kind of haunted house that we found up here. We’ve been here with almost all the same crew — a lot of the same people, the same cast. The kids are the same, the grandparents and my hubby (played by Chris Potter) are all the same people. It’s a really great group. It actually feels like family. I’m back with the family and here we are doing another one. It’s fun. I really enjoy it.

CE: Does that mean you’d be on board for even more “Good Witch” movies if Hallmark comes a-callin’?

CB: I’m sure I would. They seem to just keep going, don’t they? And they’re always fun. I really enjoy playing this part. It’s a nice refreshing change.

CE: But that’s not to say you don’t enjoy your share of daring and shocking shows as well, right?

CB: Yeah, absolutely. I’m just catching up now on season three of “Breaking Bad,” and I love those shows as well. There is a time and a place for everything, I guess. But Hallmark is just that feel-good channel. Like you watch it and you think, “Oh yeah, it’s not so bad. Life is good.” Now a lot of people tell me that this is their guilty pleasure, that they’ll just sometimes stay in bed all day on a Sunday and watch “The Good Witch” marathon. It’s kind of nice. It’s just light and it’s refreshing. So, that certainly makes me feel good.

CE: What else do you have in the pipeline?

CB: I’m looking at new options. “Army Wives” just finished up after seven seasons. We’re all done. I wish I would have known we weren’t coming back (for an eighth season), because I’m sure our writers would have wrapped up the show a little more definitively. We had some great story lines that were left hanging.

So, as soon as I get back from Canada, I’ve got meetings. I’m looking at new shows and new possibilities, which is kind of exciting. We’ll see which way the future goes, but I’m excited. I’m looking forward to something new and totally different.

CE: Lifetime is planning a two-hour retrospective “Army Wives” special with cast members, which is scheduled to air early next year. Do you know how you’ll be involved with that, or is it too early yet to know?

CB: I’m actually not sure. None of that has been worked out. I don’t know exactly what Lifetime has in mind or what’s happening there or how much of that I’ll be a part. It would be nice.
Posted by Cindy Elavsky at 11:29 AM