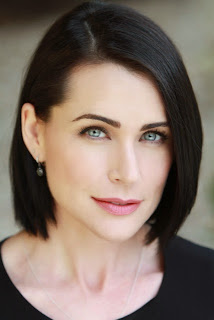 When Quinn Fuller blew onto the scene on “The Bold and the Beautiful” this summer, neither her portrayer, Rena Sofer, nor the audience had any idea of what they were in for. Since Quinn has been in L.A., she’s dangled someone over a railing, pushed someone off a bridge, tried to impale someone with a sword, locked someone in a steam room and interfered with and manipulated her son Wyatt’s life seven ways to Sunday. And yet, she’s still around and making life miserable for others — and the fans of “B&B” couldn’t be happier. I spoke with Rena recently about her new role, and she can’t wait for fans to see what else Quinn has planned.

Celebrity Extra: Since Quinn’s been in town, I’d say she’s been causing a wee bit of trouble.

Rena Sofer: Yes. Just a little bit though. Not TOO much (laughs).

CE: You have to be having an absolute ball portraying her.

RS: I can’t tell you how much fun it is. It’s really Brad (Bell, head writer and executive producer), though, who puts it upon himself to decide to take this woman — who nobody knew anything about and has no history of being a bad person that anyone knew of — and really slowly, behind everybody’s back, turn her into who we see now. However, I don’t think she’s crazy. I don’t think she’s mentally unsound; I think she’s just crazy in the sense of she does what she wants without the thought of how it’s going to really affect anyone else. She has this mental diarrhea.

CE: Did you have any idea where Brad was going to go with the character, or did you learn about it just before the rest of us did?

RS: I had no idea. I spent the first three months on the show wanting to keep Hope away from Wyatt. And then I really liked her because she hired us to do her jewelry line. I decided I wanted her to be with Wyatt, and Liam was in the way. I spent so much time not liking Liam, so I started doing little things, like locking him in the steam room when he was supposed to meet Hope. And turning the heat up to the point where he could have died and then letting him out. And I love the fact that she didn’t let him out and run away. She let him out, letting him see her and making it clear, “I’m the one who just locked you in there, and I’m the one who let you out.” To me, that’s gold.

CE: How was Brad able to lure you back to daytime television?

RS: There are so many great things about nighttime television and so many great things about daytime television. And then there are things that are not great about daytime and not great about nighttime. The one thing that daytime affords you is the ability to have a normal schedule, be home, and if you are a parent, like I am, it makes life incredibly easy. I got tired of the grind of not working, and then you’ve got a job that’s in Vancouver for eight days. And in those eight days, I wonder who’s going to take care of my kids. My husband is a director, and he’s out of town a lot.

Very little is shot here in L.A. now. So much is being shot in New Mexico and Atlanta and Vancouver and Toronto and Chicago. It closed the field for me. Then Brad Bell called and said: “Hey, I have this part. Will you come in and meet with me?” He told me about their schedule, which is four days a week, three weeks a month. I’m home usually before 3 or 4 o’clock in the afternoon. I can drive my daughter to school. I can drive her home. On top of all that, I got to create a character from scratch. That sealed the deal for me.

CE: What are some of your favorite things about playing Quinn and being on “The Bold and the Beautiful”?

RS: The great thing about this show, and probably my favorite thing about Brad Bell, is he didn’t have this iron hand about Quinn and who he wanted her to be and who she was. He was never like, “You’d better do this, and you’d better make it this.” None of that happened. This man basically invited me to his show because he trusted me, and then just said, “Here are the words.”

I started playing her lines a little bit off. I was just like, “I’m not a crier, so I don’t want to be crying every five seconds, so stop writing her that way.” I just had them stop writing that. I expressed to them that it’s not my cup of tea. Then they started writing it a little bit differently. And I started playing with their words. I didn’t change their words; I just took them in a different way than I think they expected. Brad saw what I was doing, took hold of those reins and said, “Hey, how about this?” Where do you get that kind of opportunity? In nighttime television, you are the lowest person on the totem pole as far as how you are going to play a character. They hire you to play what they want you to play, and pretty much everyone is replaceable. To be able to have the freedom to do what I do every single day is such a gift to me. It really is a gift.

CE: Hope and Wyatt are pretty fed up with Quinn, and Hope wants her out of their lives and nowhere near the baby she is expecting. How will Quinn deal with that?

RS: She’s definitely not going to give up. Clearly she sees Deacon (Hope’s father) as an asset. That is something that is helpful to her, even though she does kind of like him.

CE: Speaking of Deacon, Quinn used to be obsessed with getting Bill back, and now that that is fading, will she concentrate her efforts on Deacon?

RS: Yeah, she stopped caring about Bill a while ago. You know, when a story’s not going to work for whatever reason, it’s not going to work. You’ve just got to move on. You can’t keep forcing a situation that is not going to happen. So I’m really happy that Brad came up with the idea to have Deacon change his focus to Quinn. And I think it’s so funny that they’ve been living together all this time — since he’s been in town — and nobody knows. They’ve spent a lot of time together, but not romantically. So the fact that all of a sudden — boom! — something happened, it makes sense.

CE: Judging by the online feedback, the fans definitely approve of a Quinn/Deacon matchup.

RS: I definitely think we are going in the right direction. I don’t think I ever heard any feedback regarding Bill and Quinn, about anybody’s interest in that. This is something people are really interested in, and that’s exciting.

CE: Can you give me any clue as to what to expect regarding Quinn and Deacon’s burgeoning relationship in coming weeks?

RS: I can probably say that in upcoming weeks, their little secret relationship isn’t a secret anymore. But you will see how and when that happens.

CE: I’m sure Hope will love that!

RS: Well, she should love me, right? I mean, I love her father now. What’s wrong with that? 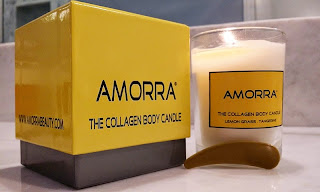 CE: Tell me how your collaboration with Dino Morra on the Amorra Collagen Body Candles came about.

RS: Dino Morra has been my facialist for 15 years, and I’ve used his products for 15 years, including his candles. These candles are his baby; he made them for his clients. I told him they should be in every store in America. I told him, “I love your product as is, and I would love to be your partner and get them out there.” And what happened is we really collaborated. We worked on them together and perfected them.

We had three scents in the first place: peony, vanilla and blood orange. And then we’ve added four scents that we created together. But he’s the chemist. I say to him, “I love this smell and this smell.” And then he goes into the lab and he comes out with Nag Champa and Arabian Spice. Or I’ll say, “I want like a really clean, citrusy one like the blood orange but lighter.” And he comes in with his lemongrass scent, which is just incredible. We also have a tobacco, vanilla and cherry-wood scent, which is such a beautiful scent for men. We have this great scent for our recovery candle: It is eucalyptus, mint, amber, menthol, arnica and MSM, which is a sulfur extract. The menthol is healing in when it’s lit, or when you place it on your chest, it will help open up your nasal passages if you’re congested. The arnica is great for bruising, and then the MSM is for inflammation.

With all the candles, there’s no wax and no paraffin. You put them directly on your skin, and they just melt into your skin. And they are so wonderful smelling too. You smell like the candle that you love to have in your house. And they’re great products.

CE: How long does the candle last, especially if you do a combination of burning it for the smell and using it on your skin?

RS: It’s a regular candle with 60 hours of burn time. If you wear it all the time, it’s going to change how long the candle will burn. But then you’re still getting the benefits of it as well. It’s $35, which is a great price for either a skincare product or a candle. The scents offered are really strong. I have my blood orange candle in my dressing area — I just have it out, not burning — and my whole area smells like it.

CE: Are the candles in stores yet, or can they be bought online?

RS: We have our own website, amorrabeauty.com, and it’s just great. You go to the site, and you just pick which candle you want. It’s really easy. And once you get the candle, it’s so fun. You’ll really love it.

(Author’s Note: I tried the lemongrass collagen candle, and I have to say, I absolutely love it. The scent is heavenly, and the actual collagen candle made my skin feel so soft and supple. I’d definitely recommend this. And what do you know — the holidays just HAPPEN to be coming up!)
Posted by Cindy Elavsky at 11:56 AM